The recent paper Election Polls—A Survey, A Critique, and Proposals by Kenett, Pfeffermann & Steinberg gives a fantastic illustration of the difference between description and prediction: they explain the different goals of election surveys (such as those conducted by Gallup) as compared to survey-based predictive models such as those by Nate Silver's FiveThirtyEight:


"There is a subtle, but important, difference between reflecting current public sentiment and predicting the results of an election. Surveys [election polls] have focused largely on the former—in other words, on providing a current snapshot of voting preferences, even when asking about voting preference as if elections were carried out on the day of the survey. In that regard, high information quality (InfoQ) surveys are accurately describing current opinions of the electorate. However, the public perception is often focused on projecting the survey results forward in time to election day, which is eventually used to evaluate the performance of election surveys. Moreover, the public often focuses solely on whether the polls got the winner right and not on whether the predicted vote shares were close to the true results."

In other words, whereas the goal of election surveys is to capture the public perception at different points in time prior to the election, they are often judged by the public as failed because of low predictive power on elections day. The authors continue to say:


"Providing an accurate current picture and predicting the ultimate winner are not contradictory goals. As the election approaches, survey results are expected to increasingly point toward the eventual election outcome, and it is natural that the success or failure of the survey methodology and execution is judged by comparing the final polls and trends with the actual election results."

As Kenett et al. (2017) write, description and prediction are not contradictory. They are different, yet the results of descriptive models can provide leads for strong predictors, and potentially for explanatory variables (which require further investigation using explanatory modeling). 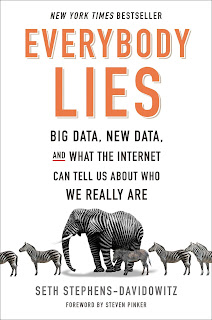 The new interesting book Everybody Lies by Stephens-Davidowitz is a great example of descriptive modeling that uncovers correlations that might be used for prediction (or even for future explanatory work). The author uncovers behavioral search patterns on Google by examining keywords search volumes using Google Trends and AdWords. For the recent US elections, the author identifies a specific keyword search term that separates between areas of high performance for Clinton vs. Trump:


"Silver noticed that the areas where Trump performed best made for an odd map. Trump performed well in parts of the Northeast and industrial Midwest, as well as the South. He performed notably worse out West. Silver looked for variables to try to explain this map... Silver found that the single factor that best correlated with Donald Trump's support in the Republican primaries was... [areas] that made the most Google searches for ______."

[I am intentionally leaving the actual keyword blank because it is offensive.]
While finding correlations is a dangerous game that can lead to many false discoveries (two measurements can be correlated because they are both affected by something else, such as weather), careful descriptive modeling tightly coupled with domain expertise can be useful for exploratory research, which later should be tested using explanatory modeling.

While I love Stephens-Davidowitz' idea of using Google Trends to uncover behaviors/thoughts/feelings that are hidden otherwise (because what people say in surveys often diverges from what they really do/think/feel), a main question is who do these search results represent? (sampling bias). But that's a different topic altogether.