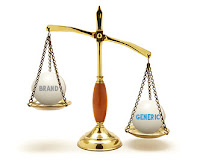 Thank you, Galit! It certainly explained a lot and pointed me into the the right direction.
There might be one slip on the third bullet paragraph (below the figure of the scale:
"3.if the confidence interval includes the equivalence bound, then the groups are equivalent; otherwise they are not equivalent". I believe it's the other way around just like you state at the last para: "A practically insignificant difference will therefore generate a narrow confidence interval that excludes the equivalence boundary (=equivalence). In contrast, a practically significant difference will generate a narrow confidence interval that completely exceeds the equivalence boundary (non-equivalence)."
Then, I also believe it is not about the CI for the differences including/excluding the clinically signifficant bound but rather the upper limit of the CI being smaller/greater than the bound. E.g. if my 95%CI of differences between the effects of the generic and brand meds is CI=5-10 and my smallest clinically significant change (bound) is 15, than the drugs are equivalent in effect. I.e. I have 95% stat-certainty that the difference between drugs' effects is smaller than 10 (confidence interval), which is smaller than the smallest clinically signifficant change (bound). What do you think?
Thank you once again for the article!
Regards,
Gustavo