Linear regression for a binary outcome: is it Kosher?

Regression models are the most popular tool for modeling the relationship between an outcome and a set of inputs. Models can be used for descriptive, causal-explanatory, and predictive goals (but in very different ways! see Shmueli 2010 for more). I admit that I bought into these "truths" for a long time, until I learned never to take any "statistical truth" at face value. First, let us realize that problem #1 relates to prediction and #2 to description and causal explanation. In other words, if issue #1 can be "fixed" somehow, then I might consider linear regression for prediction even if the inference is wrong (who cares about inference if I am only interested in predicting individual observations?). Similarly, if there is a fix for issue #2, then I might consider linear regression as a kosher inference mechanism even if it produces "nonsense" predictions.

The 2009 paper Linear versus logistic regression when the dependent variable is a dichotomy by Prof. Ottar Hellevik from Oslo University de-mystifies some of these issues. First, he gives some tricks that help avoid predictions outside the [0,1] range. The author identifies a few factors that contribute to "nonsense predictions" by linear regression:


The suggested remedy for these issues is including interaction terms for categorical variables, and if numerical predictors are involved, then bucket them into bins and include those as dummies + interactions. So, if the goal is predicting a binary outcome, linear regression can be modified and used.

Now to the inference issue. "The problem with a binary dependent variable is that the homoscedasticity assumption (similar variation on the dependent variable for units with different values on the independent variable) is not satisfied... This seems to be the main basis for the widely held opinion that linear regression is inappropriate with a binary dependent variable". Statistical theory tells us that violating the homoscedasticity assumption results in biased standard errors for the coefficients, and that the coefficients might not be the most precise in terms of variance. Yet, the coefficients themselves remain unbiased (meaning that with a sufficiently large sample they are "on target"). Hence, with a sufficiently large sample we need not worry! Precision is not an issue in very large samples, and hence the on-target coefficients are just what we need.
I will add that another concern is that the normality assumption is violated: the residuals from a regression model on a binary outcome will not look very bell-shaped... Again, with a sufficiently large sample, the distribution does not make much difference, since the standard errors are so small anyway.

Hellevik's paper pushes the envelope further in an attempt to explore "how small can you go" with your sample before getting into trouble. He uses simulated data and compares the results from logistic and linear regression for fairly small samples. He finds that the differences are minuscule.

The bottom line: linear regression is kosher for prediction if you take a few steps to accommodate non-linear relationships (but of course it is not guaranteed to produce better predictions than logistic regression!). For inference, for a sufficiently large sample where standard errors are tiny anyway, it is fine to trust the coefficients, which are in any case unbiased.
No comments:

The New York Times article Big Study Links Good Teachers to Lasting Gain covers a research study coming out of Harvard and Columbia on "The Long-Term Impacts of Teachers: Teacher Value-Added and Student Outcomes in Adulthood". The authors used sophisticated econometric models applied to data from a million students to conclude:


"We find that students assigned to higher VA [Value-Added] teachers are more successful in many dimensions. They are more likely to attend college, earn higher salaries, live in better neighborhoods, and save more for retirement. They are also less likely to have children as teenagers."

When I see social scientists using statistical methods in the Big Data realm I tend to get a little suspicious, since classic statistical inference behaves differently with large samples than with small samples (which are more typical in the social sciences). Let's take a careful look at some of the charts from this paper to figure out the leap from the data to the conclusions.

How much does a "value added" teacher contribute to a person's salary at age 28?


The slope in the chart (Figure 1) might look quite dramatic. And I can tell you that, statistically speaking, the slope is not zero (it is a "statistically significant" effect). Now look closely at the y-axis amounts. Note that the data fluctuate only by a very small annual amount! (less than $1,000 per year). The authors get around this embarrassing magnitude by looking at the "lifetime value" of a student ("On average, having such a [high value-added] teacher for one year raises a child's cumulative lifetime income by $50,000 (equivalent to $9,000 in present value at age 12 with a 5% interest rate)."

What happens to the average student test score as a "high value-added teacher enters the school"? 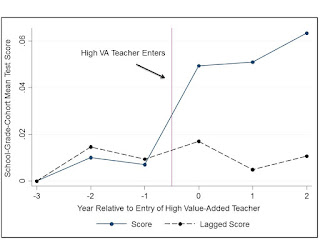 The improvement appears to be huge! But wait, what are those digits on the y-axis? the test score goes up by 0.03 points!

Reading through the slides or paper, you'll find various mentions of small p-values, which indicate statistical significance ("p<0.001" and similar notations). This by no means says anything about the practical significance or the magnitude of the effects.

If this were a minor study published in a remote journal, I would say "hey, there are lots of those now." But when a paper covered by the New York Times and is published as in the serious National Bureau of Economic Research Working Paper series (admittedly, not a peer-reviewed journal), then I am worried. I am very worried.

Unless I am missing something critical, I would only agree with one line in the executive summary: "We find that when a high VA teacher joins a school, test scores rise immediately in the grade taught by that teacher; when a high VA teacher leaves, test scores fall." But with one million records, that's not a very interesting question. The interesting question which should drive policy is by how much?

Big Data is also becoming the realm in social sciences research. It is critical that researchers are aware of the dangers of applying small-sample statistical models and inference in this new era. Here is one place to start.
No comments: