Moving Average chart in Excel: what is plotted?

In my recent book Practical Time Series Forecasting: A Practical Guide, I included an example of using Microsoft Excel's moving average plot to suppress monthly seasonality. This is done by creating a line plot of the series over time and then Add Trendline > Moving Average (see my post about suppressing seasonality). The purpose of adding the moving average trendline to a time plot is to better see a trend in the data, by suppressing seasonality. 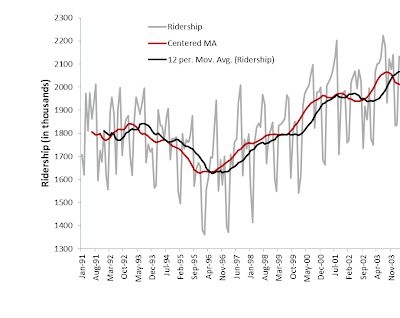 The fact that Excel produces a trailing moving average in the Trendline menu is quite disturbing and misleading. Even more disturbing is the documentation, which incorrectly describes the trailing MA that is produced: